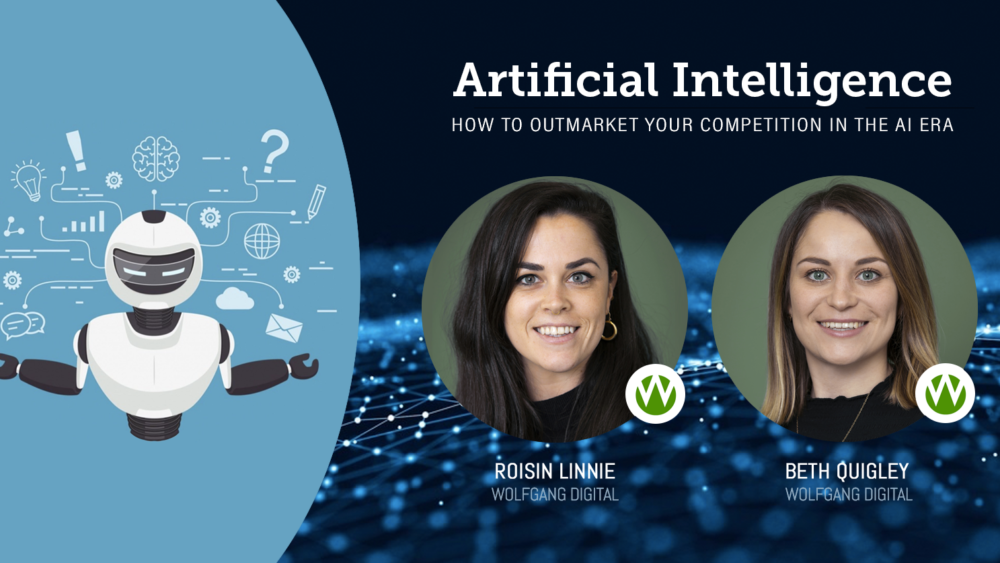 How To Outmarket Your Competition in The AI Era

AI Technology is not only disrupting entire industries, but it is also changing the dynamics of departments.

5G rolled out in Ireland a few months ago. The resulting increased internet speeds and increasing amounts of data drive us deeper into the AI era of the internet. The internet giants have been busy building out their AI capabilities for years now, Google has gone so far as to say it is now an “AI first” company. This new dawn poses existential questions for digital marketers.

Talk: How To Outmarket Your Competition in The AI Era

In this talk, Beth and Roisin will explore this new landscape discussing the strengths and the weaknesses of the machine, deliver practical tactics and share award-winning cases studies which will enable digital marketers to prosper in the AI era.

As head of social for Wolfgang Digital, Roisin has her finger on the rapidly beating pulse of Facebook, Twitter, Instagram, Pinterest and beyond. Roisin manages a performance social team of 8 who’s main focus is driving conversion through social media and integrating social with other channels to drive results.

Roisin’s work has won multiple Irish & International awards including ‘Best use of Social in a Search campaign’ at the European Search Awards in 2019, ‘Best Public Sector Campaign’ at the Social Buzz awards in 2018 & ‘best integration of search into cross-channel marketing’ at the Landy awards in Seattle 2018. Roisin’s team has also had 6 case studies published by Facebook, Twitter and Pinterest, two of which were the first in Ireland (Pinterest & Twitter). Client Experience: Red Bull, Littlewoods Ireland, DAA, Tesco Ireland, Brown Thomas.

Beth first fell in love with digital marketing during an internship in San Francisco, where she was introduced to AdWords and social advertising. Beth began work at Wolfgang Digital as an AdWords trainee and has since progressed onto the Client Engagement team, working on strategy development with some of Ireland’s biggest retailers including Littlewoods Ireland, Brown Thomas and Arnotts. Her team have won numerous awards both in Ireland and abroad, including “Best in Data & Analytics” at the Digital Media Awards 2019, and “Best Use of Search – B2C” at the European Search Awards in Budapest this year.

Our highly dedicated team are specialists in their chosen fields and as a result, Wolfgang Digital has numerous awards to its name including 2 x 2019 Google Premier Partner Awards,  3 x 2019 Digital Media Awards, 4 x 2019 European Search Awards, 2 x 2019 U.S. Landys Search Awards, the 2019 European Search Award for Best Large Integrated Search Agency for the second year running and the 2019 SEO Agency Of The Year at the U.S. Landys Search Awards. In addition to this, our campaigns have been featured as official Success Stories by Google, Twitter and Facebook.